This past Sunday our family went out to the country to watch the moon turn red as the earth’s shadow eclipsed it.

We ate an early dinner, had everyone shower, brush teeth, make lunches and get school stuff ready for the next day. We grabbed our sleeping bags, pillows, and made sure everyone used the bathroom (I also bring an extra potty seat…just in case) and then we headed West to escape the city lights and into the dark country. 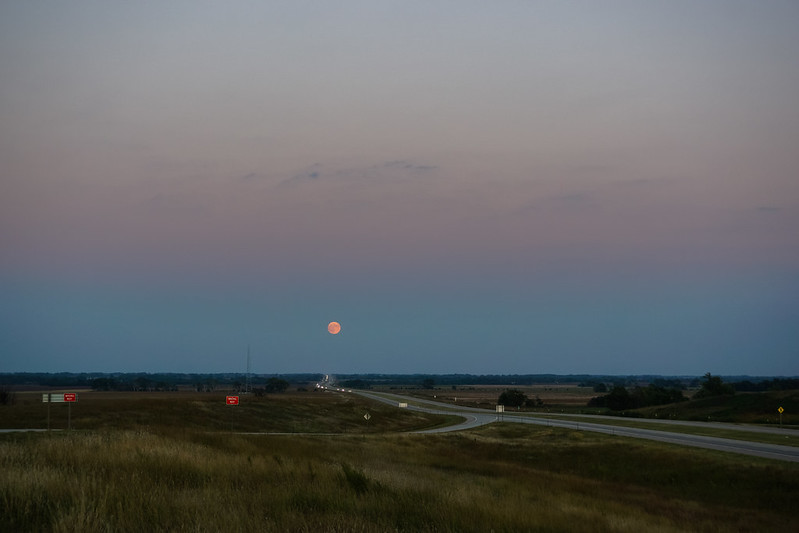 We watched the bright orange sun quickly disappear under the horizon and then we looked behind us, the curtain opened, and the massive Harvest Moon rose majestically in the East.

We turned down our “secret passageway” and found our spot in an old cemetery in the middle of a corn field. (Since that’s not creepy at all.)

My awesome husband set up his equipment while I helped the kids layout our “camp” – a big old blanket, sleeping bags set out next to each other, and old pillows. I tried keeping them quiet so as not to alert anyone of our covert location. They were all wired and excited since it was past their bedtime on a school night and the moon was full so there was a lot of hushing on my end. 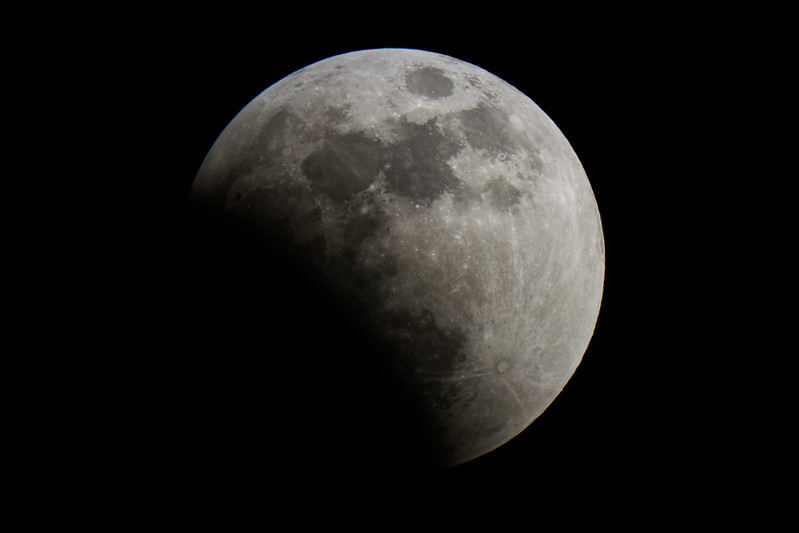 Not long after we arrived, shortly after 8:30, the eclipse had already begun. We took turns looking through the binoculars and the scope.

Around 9 it started getting chilly so the kids and I settled into our sleeping bags with minimal whining and squabbling (for once!). Every now and then one would get up to go look through Daddy’s scope or get a closer look through the binoculars as the eclipse progressed and the “blood” spread over the moon. 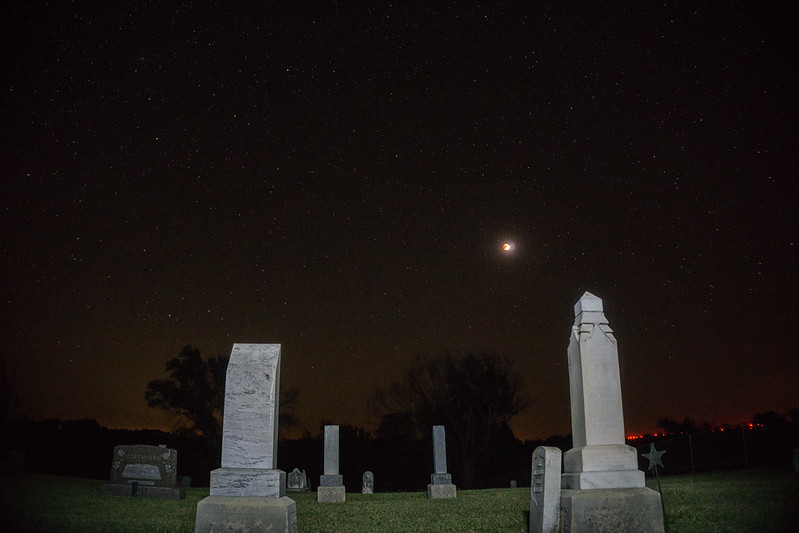 My husband took a few slightly creepy pics of the eclipse in the cemetery. The kids wanted to follow him but I told them to stay put. They asked if it was because the ghosts might get them if they went in. 🙂

We lied there huddled up in our sleeping bags watching the moon change to a rustic brownish/reddish hue and playing “Who can Spot a Satellite?” Every now and then a random meteor would flash across the sky reminding us of when we were there together last for the Perseid Meteor Shower in August.

I told them a few stories. One I made up about a baby spider (of all things that’s all I could come up with). It was a story to put Eric Carl’s Hungry Caterpillar to shame. (not really.) Then I told them stories about when they were all little, things they wouldn’t have remembered on their own. I could tell they loved just “being” there with me, knowing I couldn’t go anywhere or “just check something” or do something else “real quick”. I loved being with them there in the quiet, in the peace, with my family. I love my family. 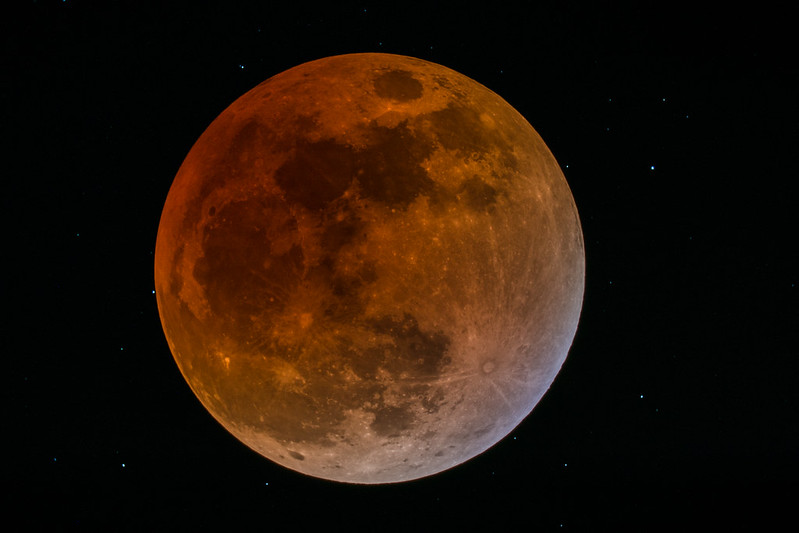 This was now in the middle of total phase. I think it was around this time, maybe around 10? The earth’s shadow covered the moon completely now, blocking the sun’s reflection and turning the night-time sky pitch black. Most everyone was either asleep by now or just about there.

I was lying there, enjoying this beautiful moment with my kids, thinking about the unfathomable mysteries of the universe when suddenly my husband’s flashlight turned on and his voice broke the peaceful silence as he yelled out,

Jolted out of my musing, I bolted up and turned around, half-expecting to see either a person, or a coyote, or…a mountain lion. (Since they’ve recently been spotted in these here parts.)

We were lying right next to a corn field and I looked and saw the corn husks moving around a lot but we couldn’t see what it was. So I got the kids up and told them to get into the van quickly.

In a rare moment of immediate obedience, they all shot up and quickly piled back into the van.

Once they were all in the van, I went over to my husband and we looked to see if there was anything there. I was still expecting a herd of coyote to come leaping through the husks, pouncing on us and leaving our poor children abandoned and orphaned in an abandoned cemetery. (I don’t have a wild imagination at all.)

Eventually, whatever it was went away. So we decided to get the kids back out since sleeping in the van is almost impossible.

…the horrible sound of a tortured animal, screeching a high-pitched sound like if it was struggling.

We all lied still, hearing our own breath and just trying to remain calm.

The sound of a hundred coyotes was all around us, we were surrounded.

Not really. But we really did hear coyotes all around us in the dark, not quite sure how close they were.

We’ve heard them before while out there but by this time I was thoroughly spooked and my imagination was already on hyper-drive so I called it.

We ran back into the van, reclined our seats and settled our pillows as best we could and watched the rest of the eclipse through the “moon roof”.

Everyone whined and squirmed around for a little until eventually it was all quiet and all I could hear were the sounds of their heavy breathing, the oil pump chugging along rhymically, and the sound of howling coyotes carrying on their full-moon serenade in the distance. 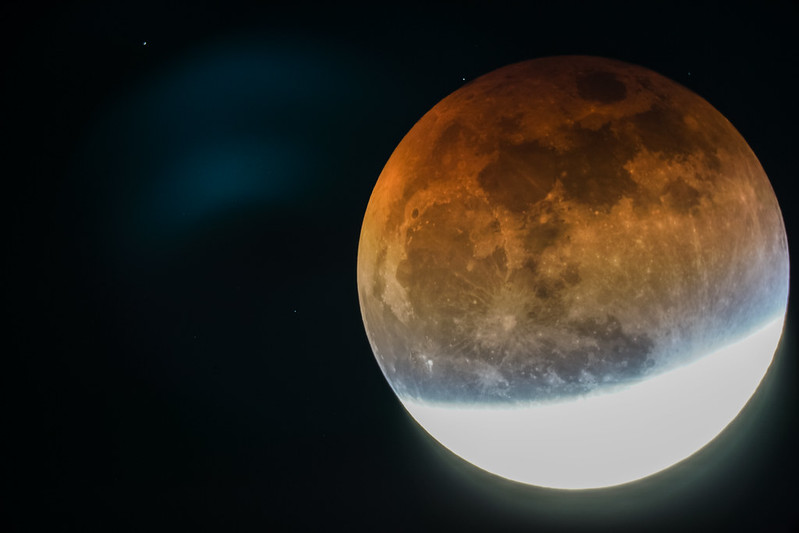