So remember about eight months ago, I shared our Healing Goodbye to our Dog?

Well, we missed her so much more than we thought we would – especially me. I had no idea just how much I had grown used to having Bella around and though I thought I’d be ok without a dog for a while, it didn’t take long before I caught “puppy fever”.

It started with “just looking” at puppy pictures…then my husband started sending me random cute puppy pictures. And then, we found ourselves talking about it together.

One day, I came into our room and caught my husband looking at something on his phone –

I laughed because I’d been doing the same thing downstairs.

Long story short, soon we were stalking our local animal shelter’s adoptable animals page on their website. One day, my scrolling eye stopped on a new photo of a sweet lab puppy with fur so light it looked white. And then, somehow, I ended up at the animal shelter and decided to see what she was like – just out of curiosity, of course. 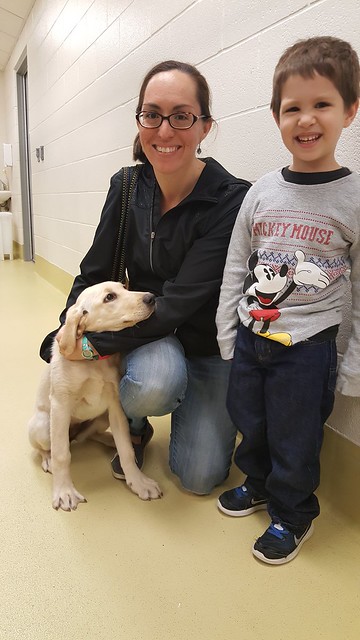 Well, that did it. Next thing I knew, there was a puppy in our backyard. 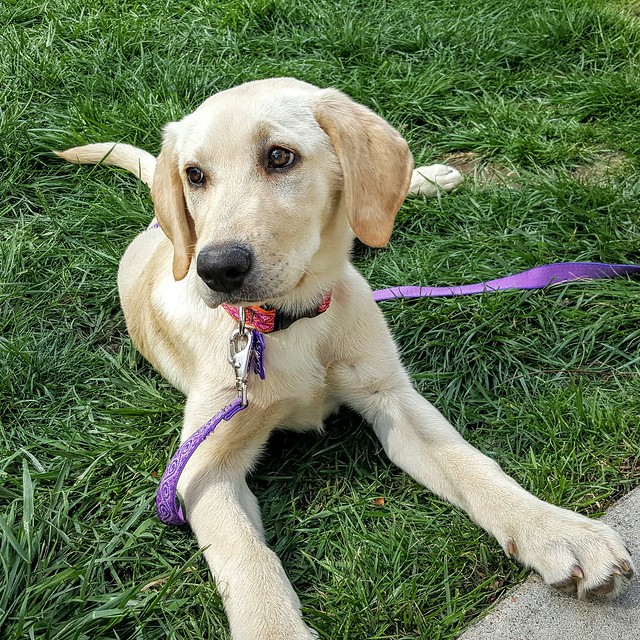 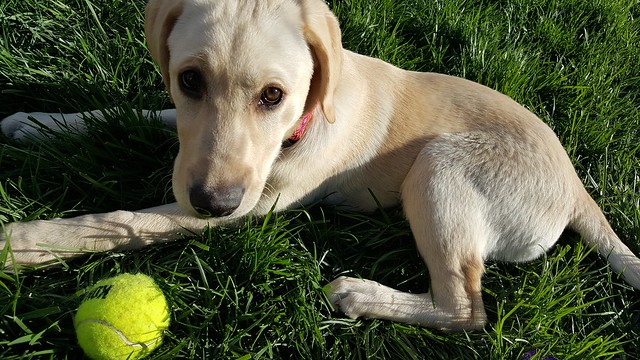 She was so pretty and soft – we called her Daisy.

We soon found out, however, that though she was pretty and soft and cute as can be – puppies are no easy task!

Thankfully it didn’t take too long to crate-train her so she only used the backyard as her “toilet”. But we weren’t quite prepared for the nibbling… 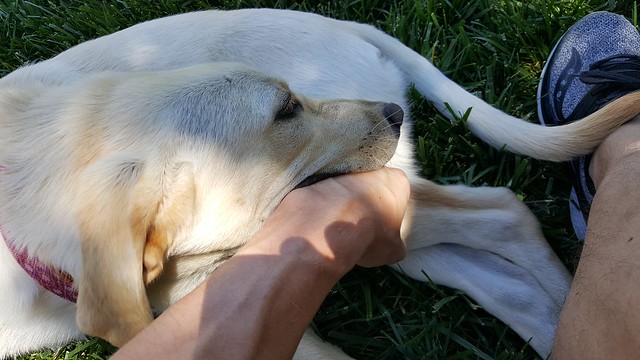 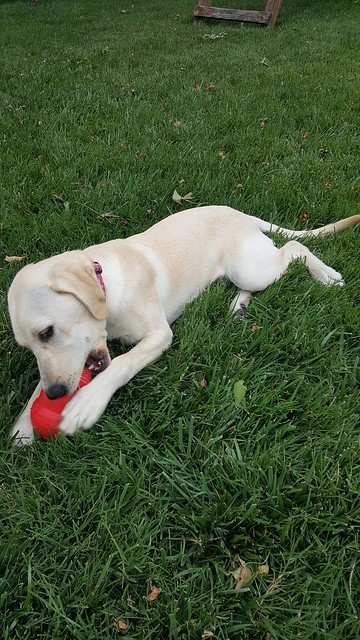 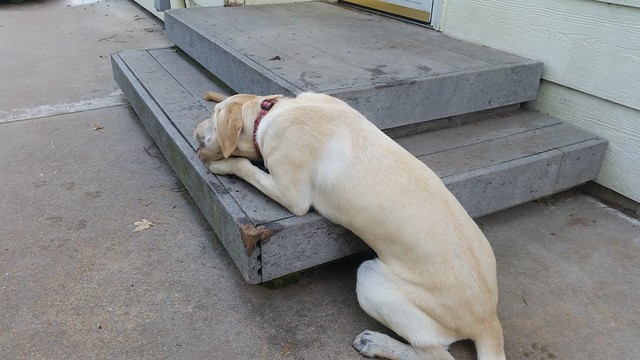 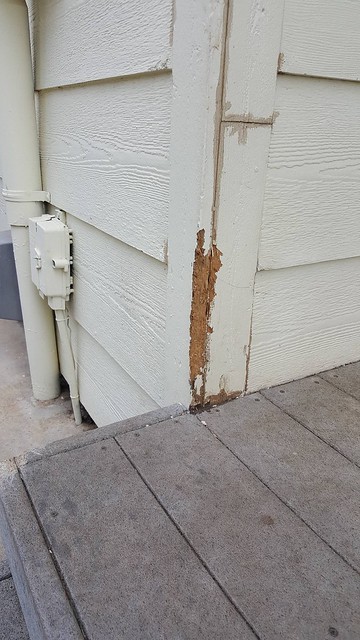 Everywhere!! The kids soon learned to put their outside toys away unless they wanted them to become new chew toys for Daisy.

Apparently, all that chewing is exhausting… 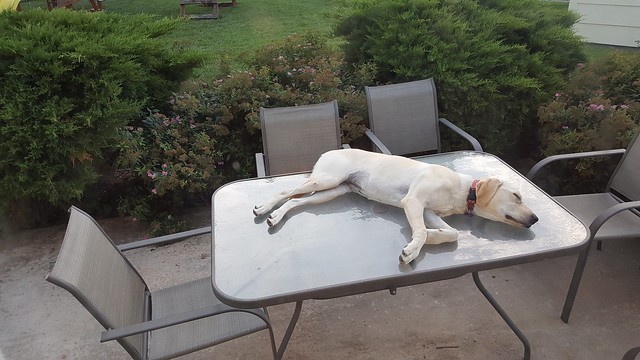 Cute pictures aside, it hasn’t been a walk in the park owning and caring for a puppy. One reason I didn’t share about her until now is because there were many times within the last eight months when I wasn’t sure if we would keep her. Ask my poor patient friends who had to hear me ask for their prayers several times, always ending with, “I think this is really the end this time,” to then end up deciding to give her “one more chance”.

Luckily for Daisy, the kids loved her. One reason I decided to get another dog was for all of us to have a special companion but especially for our oldest son who struggles with anxiety/anger management – I hoped she could become a “therapy dog” of sorts for him.

At first, he wasn’t so sure about her – she was so hyper and he just didn’t know how to handle that. Then, over the summer, something magical happened and he “discovered” her and realized – “Hey, I like this dog!”

I started sending him outside to be with Daisy when he needed a break or was on the verge of a meltdown. He’d go out there and stroke her ears, the anxiety or anger melting out of him with each stroke. Now, the first thing he wants to do after we’re finished at school is “go see Daisy!” so he can stroke her ears and play with her.

She still likes to nibble on me, still chews everything! (Though not quite as much), still jumps up on us when she’s excited (which is all.the.time), still ignores me as much as my kids, still drives me and my husband a little stir-crazy. Ok, maybe a lot stir-crazy.

But, she’s also still cute, still soft, still loveable, still loves the kids (she never nibbles on them!), still wants to be with us wherever we are (she thinks she’s still a small puppy and tries sitting in my lap), and she still has a lot of growing and learning to do.

We “celebrated” her first birthday this week – I even went to the petstore and bought her some special treats. Yup, she has me. Hook, line and sinker.

And I guess we’ll keep her…for today at least. 😉 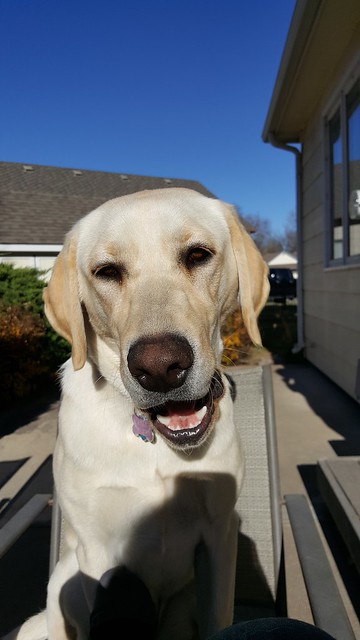