Sharing more reflections on the Year of the Faith and Faith & Works today at CatholicMom.

Also, on a similar thought trail…

I heard a conversation about God and religion on NPR today that made me sad but also gave me some food for thought. Typical NPR style, the focus was on living life without believing in God or religion. (Similar to the “Good without God” billboards) 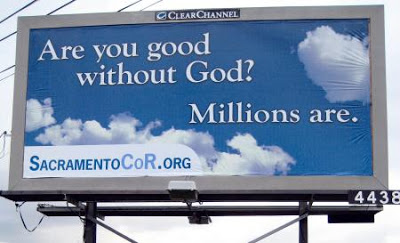 One woman shared that she still likes to attend synagogue and have “quiet time there with her thoughts”. Others shared how they gave up on their religion when they realized none of it actually made any logical, factual or scientific sense. And then it came turn for the Catholic and she, of course, left because of the teachings of the Church she didn’t agree with, namely those pertaining to homosexuality and premarital sex. (Why is that what it always comes down to?)

In each case, all expressed a sense of new-found freedom as they broke loose from their “religious chains” and let go of their dependence on a belief in God. (Although, one of the interviewees did admit that even though he does not believe in God (anymore) he really wants to.)

So I thought about this today and wonder, if they are turning away from God who in exchange are they turning to? Themselves?

God isn’t just some idea or feeling we choose to believe or not believe in. Unlike “Santa Clause”, the “Easter Bunny” and the “Toothfairy”, God is REAL. He’s not just some figment or marketing tool created to make us feel better about ourselves.

He gave us free will but whether I choose to believe in Him or not – He exists.

I have no power over that. What I can do though is choose to believe in Him, LoVE Him, and live my life for Him.

It doesn’t always feel good, in fact there are many times I feel nothing.

But He’s still here. And that, to me, is very reassuring, believing that I have someone – other than myself or any other temporary person/place/thing/idea – Who will be there with me -always.

2 Replies to “Faith First, Then Works”