First the recipe: (Because that’s all that matters), then the story.

2. Prepare filling: In a medium bowl (or your mixer bowl), beat cream cheese with sweetened condensed milk and vanilla extract until smooth. Add egg and flour and beat well. Set aside.

3. Prepare brownies by following the box directions or your own recipe. {Note: I used melted butter instead of vegetable oil.}

4. Stir in half of the toffee bits and half of the chocolate chunks into the brownie batter.

5. Scoop half or so of the brownie batter into the greased pan and spread it so it covers the pan evenly.

7. Use a large scooper or big spoon to drop the reserved brownie batter over the cream cheese filling.

8. Use a small knife or fork and gently create swirls between the brownie mixture and cream cheese filling. You don’t need to mix it, just make swirls on the surface level.

9. Sprinkle the rest of the toffee bits and chocolate chunks over the top.

10. Bake 40 to 45 minutes, or until you put a toothpick (or fork in my case) in the middle and it comes out ‘clean’ – meaning the batter is baked all the way through.

11. Cool on an oven rack for about 10 minutes or so, and then transfer to the fridge since it has the cream cheese in it. I left mine in the fridge about 3 or 4 hours before we devoured it but you could probably eat it sooner or even the next day. The longer it’s in the fridge, the more ‘set’ it will get.

{Optional: I think the only thing that might make this even better than it already is would be toasted walnuts or pecans. And maybe caramel drizzled over the top…}

I’ve wanted to make some sort of fantastical dessert for a while but wasn’t sure what yet. All I knew is that it would involve chocolate. Motivation hit me when my husband came home raving about some dessert his co-worker’s wife had made and everyone was raving about it. The name peaked my attention as he whispered it into my ear – “Better than S. E. X. Cake”. Hmmmm, thought I – is that possible? (blush). Ok so the challenge was on – could I make a Better Than Better Than S. E. X. dessert? I went to the store with a recollection of the vague retelling of the ingredients my husband mentioned – heath toffee bits, sweetened condensed milk…that was it. So I got those and then saw the dark chocolate chunks and figured maybe I could make something with those too.

So Monday morning I told my daughter I was going to make some sort of dessert for Memorial Day. I started looking up the recipe for the “BTS” cake but quickly had to stop when she decided to see what I was doing. “Mama, what does B.T.S. mean” Uh…umm…nothing, nevermind. That wasn’t how I planned on telling her about all that. 😉 Not yet anyway. {Actually, maybe I should do that….} ok back to the story.

So she went to the pantry and brought out the Ghiradelli brownie mix box, the toffee bits and the dark chocolate chunks and said we should make something with those. 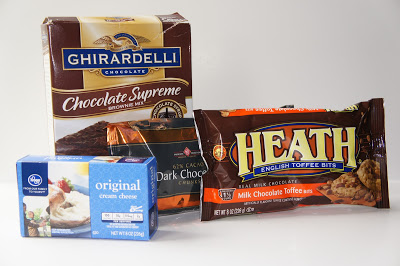 I remembered we had some cream cheese I wanted to use and the sweetened condensed milk. I looked around for recipes with this ingredients and found these two: Cream Cheese Swirl Brownies with Heath Bars and Pecans and Cream Cheese Brownies.

Inspired, I took a little bit of this and that from each recipe and voila; a new creation – Scandalous Fudgy Toffee Cheesecake Swirl Brownies.

Warning : These are not for the faint hearted. Only chocolate addicts will fully appreciate the amazingness of this recipe. If you are trying to avoid sugar and eat ‘healthier’ pretend like you’re not and make these, eat them, and enjoy every.single.scandalously-luscious.bite. Or, you could just look at this picture and drool over it whilst eating carrot sticks…and home-made hummus.