I was planning on staying mostly quiet on the blog this week on account of Holy Week. But I came across the prayer of the hour of Jesus after a recent conversation and after reading it, decided I had to share it.

If you’ve never read it and may have wondered what Jesus was thinking before his Passion, or if you’ve maybe forgotten about it, take some time this week to read it and meditate on the last prayer of Jesus before he died for us.

It is a beautiful romantic prayer prayed by One who really, really loves us. 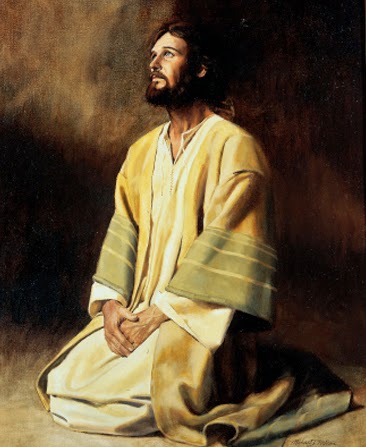 The Prayer of Jesus

When Jesus had said this, he raised his eyes to heaven and said,

“Father, the hour has come. Give glory to your son, so that your son may glorify you, just as you gave him authority over all people, so that he may give eternal life to all you gave him.

Now this is eternal life, that they should know you, the only true God, and the one whom you sent, Jesus Christ. I glorified you on earth by accomplishing the work that you gave me to do. Now glorify me, Father, with you, with the glory that I had with you before the world began.

I revealed your name to those whom you gave me out of the world. They belonged to you, and you gave them to me, and they have kept your word. Now they know that everything you gave me is from you, because the words you gave to me I have given to them, and they accepted them and truly understood that I came from you, and they have believed that you sent me.

And now I will no longer be in the world, but they are in the world, while I am coming to you. Holy Father, keep them in your name that you have given me, so that they may be one just as we are. When I was with them I protected them in your name that you gave me, and I guarded them, and none of them was lost except the son of destruction, in order that the scripture might be fulfilled.

I pray not only for them, but also for those who will believe in me through their word, so that they may all be one, as you, Father, are in me and I in you, that they also may be in us, that the world may believe that you sent me.

Father, they are your gift to me. I wish that where I am they also may be with me, that they may see my glory that you gave me, because you loved me before the foundation of the world.

Righteous Father, the world also does not know you, but I know you, and they know that you sent me.

I made known to them your name and I will make it known, that the love with which you loved me may be in them and I in them.”