Alrighty, now for number three on my list of 7 Things I Want to Write and Share. (What?I never said I’d go in order.)

Wayyy back in 2012, my husband, his parents, I and our kids stood in wheat field observing a partial solar eclipse. On our way home, my husband told us we’d get a chance to see a total solar eclipse in about five years. It seemed so long away at the time and then suddenly five years went by and on August 21st, 2017 we really did!

A few months before the great event, he scouted out a viewing spot in Nebraska close to a place he travels to work sometimes right along the center of the path of totality. The morning of August 21st we woke up at 5 a.m., packed up his scope and photography tools, some food and water, the kids of course, and headed north.

Since we started early the roads weren’t overwhelmingly crowded. It was only when we stopped to fuel-up that we noticed how unusually busy the small-town gas station was for a Monday morning. Other than that, there weren’t any obvious signs that something spectacular was about to occur.

Well, except for this one – 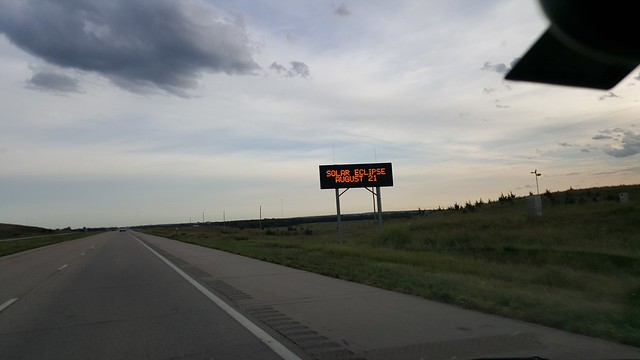 However, once we entered into Fairmont, NE, we started seeing more cars parked on the side of the road and small gatherings of people here and there with campers and tents set up.

We pulled off the main highway onto a dirt road and things started feeling a little strange. We passed by a few other people parked on sides of the road, sitting on their lawn chairs sipping beverages. They waved to us as we drove by – as if it was just another usual day in Fairmont. (Who knows, maybe that is what they do there every day?)

I felt like I was part of something…odd…and potentially exciting. But mostly odd…and slightly like the part in a movie where everything is going along normally right before an alien invasion descends upon the earth.

We arrived to the spot around 9:30 a.m. and, to our dismay, someone else was already there! How could they?! Didn’t they know we had already claimed that patch of dirt lonngggg before they even knew there would be a solar eclipse. I bet they just found out that morning. Sheesh.

Oh well, we drove down a bit further and ended up finding an even better spot by the corn field, so there.

My husband started setting up his equipment and the rest of us made ourselves comfortable. We forbade the use of the word, “boring”, I mean what could be so boring about hanging out by a cornfield on a dirt road in the middle of “nowhere”? 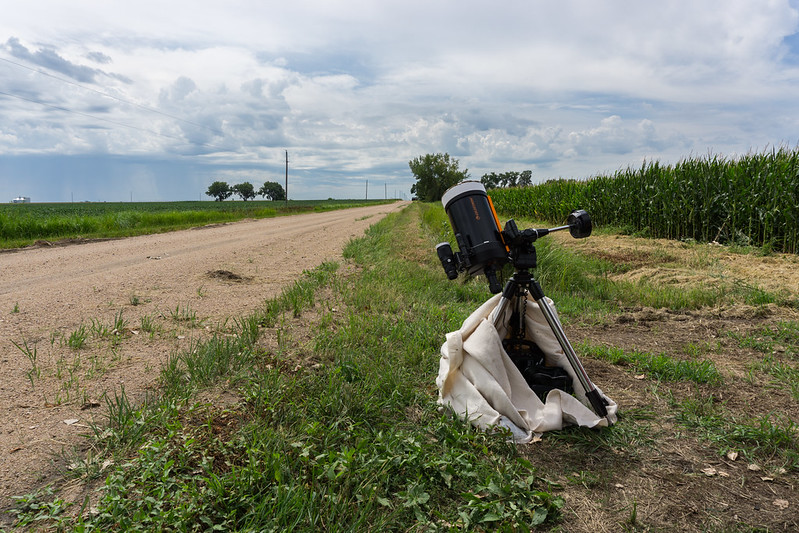 Thankfully our daughter brought Uno and the boys’ light sabers were in the trunk so that kept them “entertained”. We also packed food that I threw at them to fend off any whining.

One might wonder, what happens when you’re hanging out in a cornfield for a few hours with kids who inevitably will have to “go to the bathroom”. 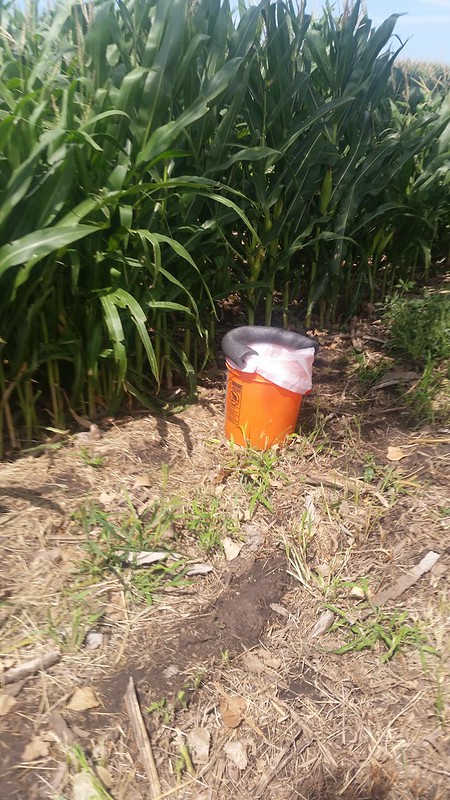 I was pretty proud of this portable toilet idea and thankful we brought it.

Around 11:35 a.m. the moon began its transit over the sun but clouds had come in making us nervous about what the view might be like for totality. 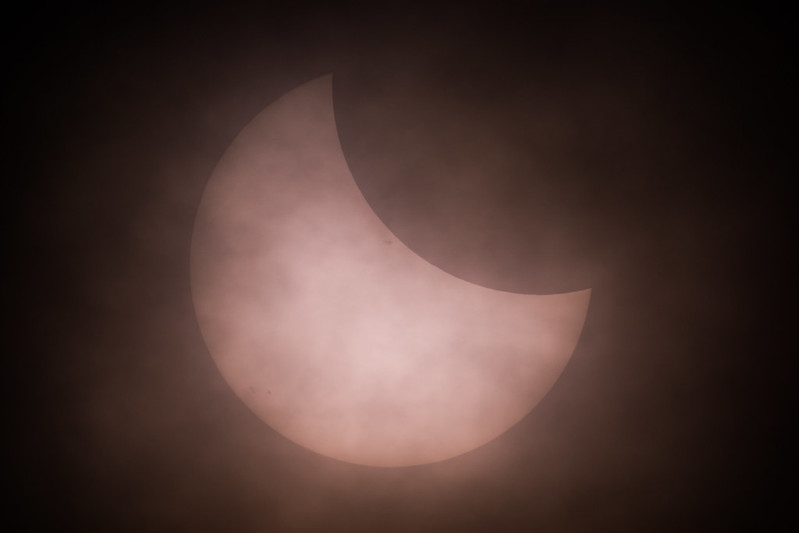 It remained cloudy and we prepared ourselves for disappointment.

Then, about 30 minutes before totality, we sighted a blue clearing moving in our direction and remained cautiously hopeful, hoping it would make its way over us just in time.

Ten or so minutes before totality, the blue patch made its way over us and the clouds opened up at just the right time! 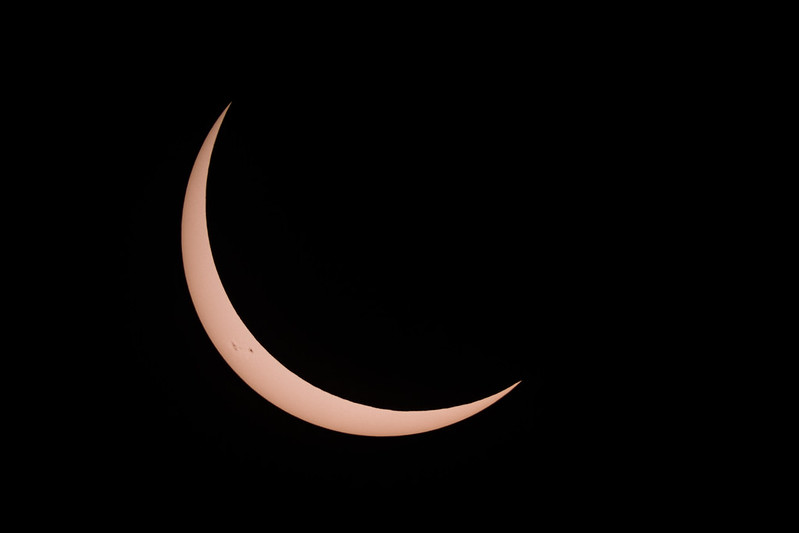 As the moon closed in, the temperature dropped from a muggy 85F with a hot breeze down to what felt like a cool 65F breeze. We looked up into the sky and saw stars and planets and the horizon in every direction looked like a sunrise/sunset.

The picture on the left is 7 minutes prior to totality, and the one on the right is about half way through totality. 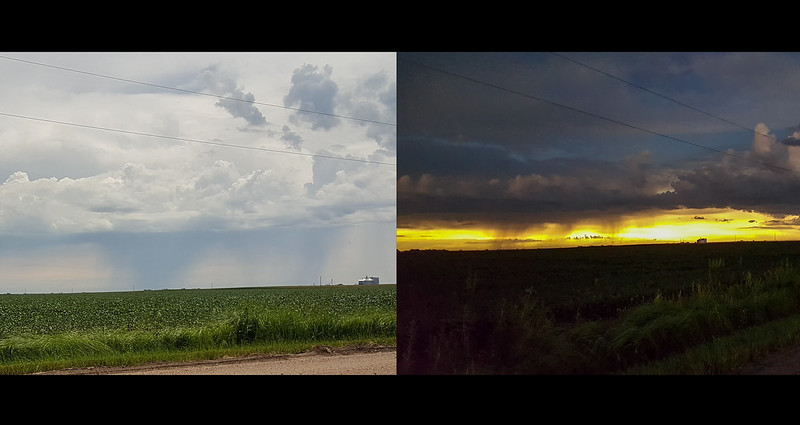 It felt like evening…and morning, but it was one o’clock in the afternoon! By now we were all standing in the middle of the dirt road, looking around at this surreal sight, crying out in excitement and shock at what we were seeing!

I just kept turning and taking it in, my heart pumping faster and I felt excited and slightly terrified…this was so bizarre! 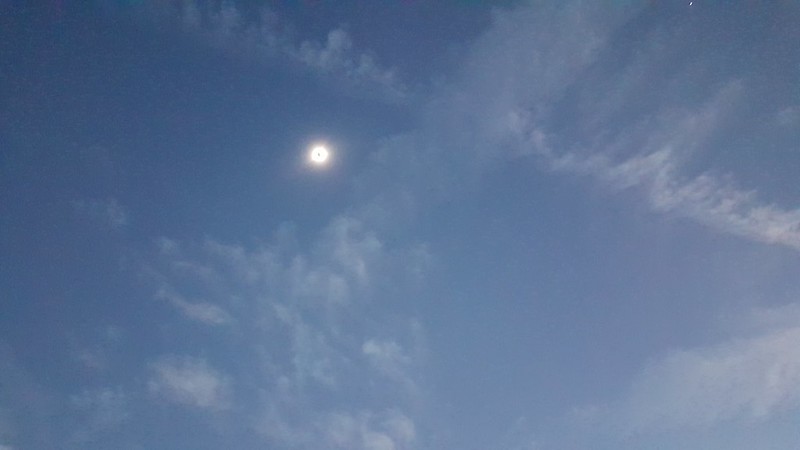 It’s a terrible picture but you can kind of see the black dot in the middle of the sun. It doesn’t look all that impressive in this picture but when I stood there and looked up and saw it, I…I just can’t explain in words the feeling of seeing such a terrific sight. It was unlike anything I’d ever seen before.

I can see how people got so freaked out about this before they understood what an eclipse was – or even that the moon and the sun were objects in outer space and not gods.

For my husband and me, our kids, and his parents, it was two and a half minutes of the greatest celestial events we’ve ever witnessed. I can still close my eyes and see it.

It was amazing enough to view and experience this event in person, I’m so thankful and proud of my husband for capturing a photographic record of the Great American Total Solar Eclipse.

Below are some of my favorites, check out his Total Solar Eclipse album for more.

Totality with the corona shining brightly around the moon. 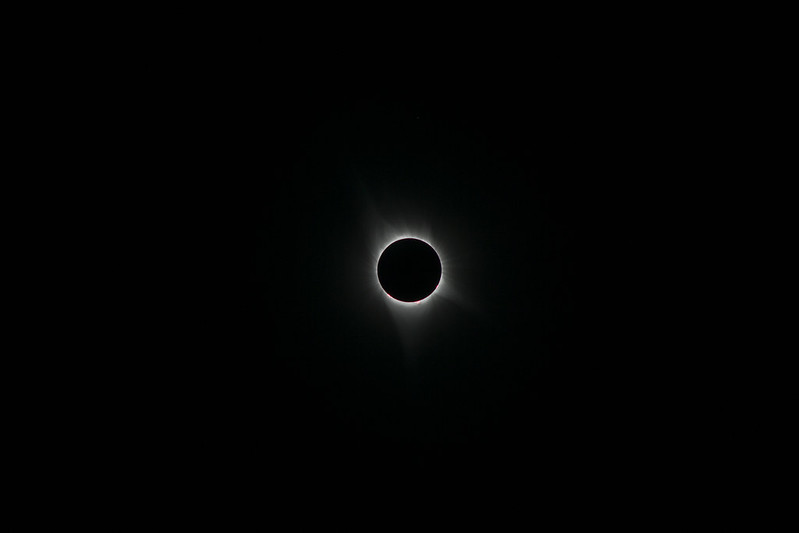 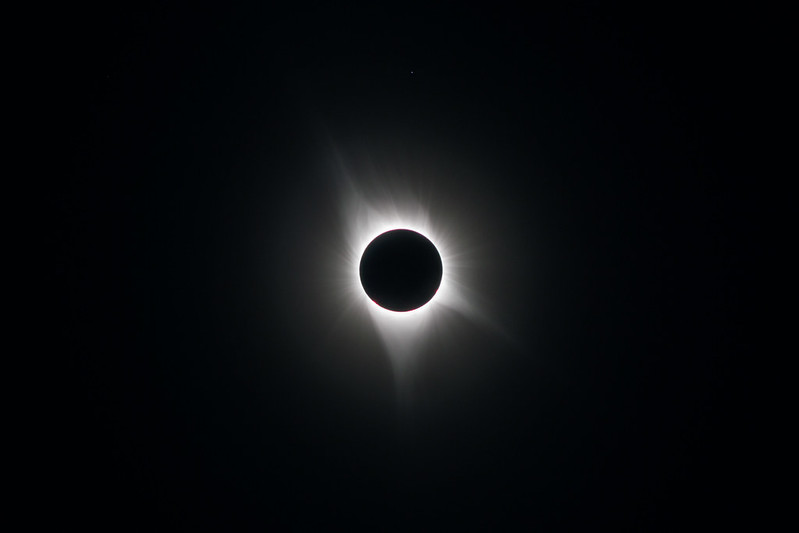 These “solar prominences” (not to be confused with “solar flares”) are awe-some. 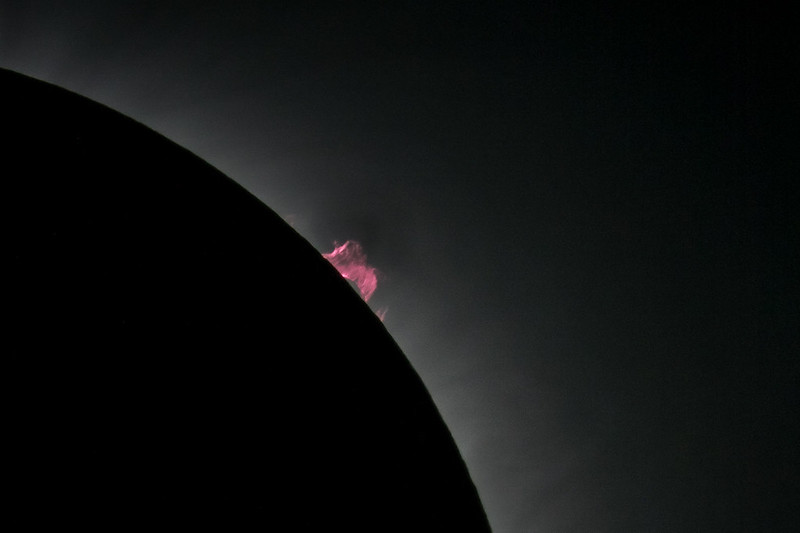 …and the chromosphere of the sun peaking around the lunar limb, about 26 seconds after totality was done. (His words, not mine.)

The show’s finale came just after totality ended, the sun’s light peeked around the edge of the moon creating the spectacular “Baily’s Beads” effect. 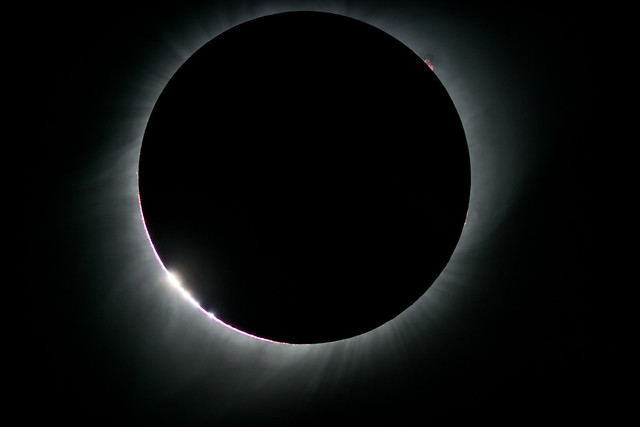 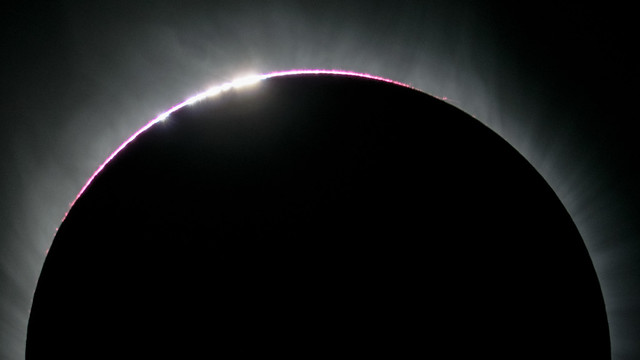 For me, seeing the Baily’s Beads is what I’ll remember the most from that day. So brilliant!

As annoying and distressing the clouds were that day, they really added a different dimension for some of the pictures. We were fortunate that a clearing of the clouds happened just minutes before totality, then they came back right as totality was ending as shown here. 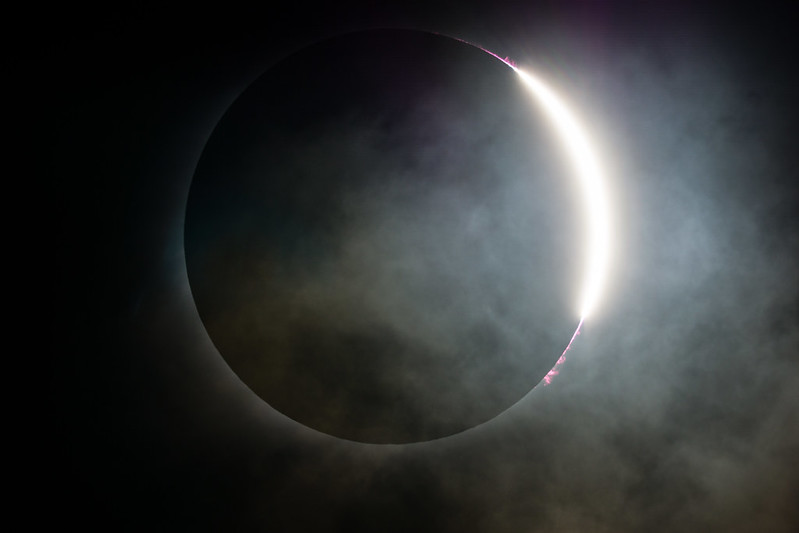 Before that day, I really didn’t know what to expect and honestly had no idea how cool it would be. As we drove home and in the days that followed, I’ve tried to come up with the right words to describe it all.

Simply put, it was “out of this world.”

One Reply to “The Great American Total Solar Eclipse! {With Pictures}”